The Jindabyne Bushpigs went down to the Taralga Tigers in a physical Round 4 encounter, 40-14.

Despite the scoreline, there were many positives for the Bushpigs, who were missing 5 key players for the road trip to Taralga.

Before the match, the sides commemorated ANZAC Day with a rendition of The Last Post and observing a minute’s silence. 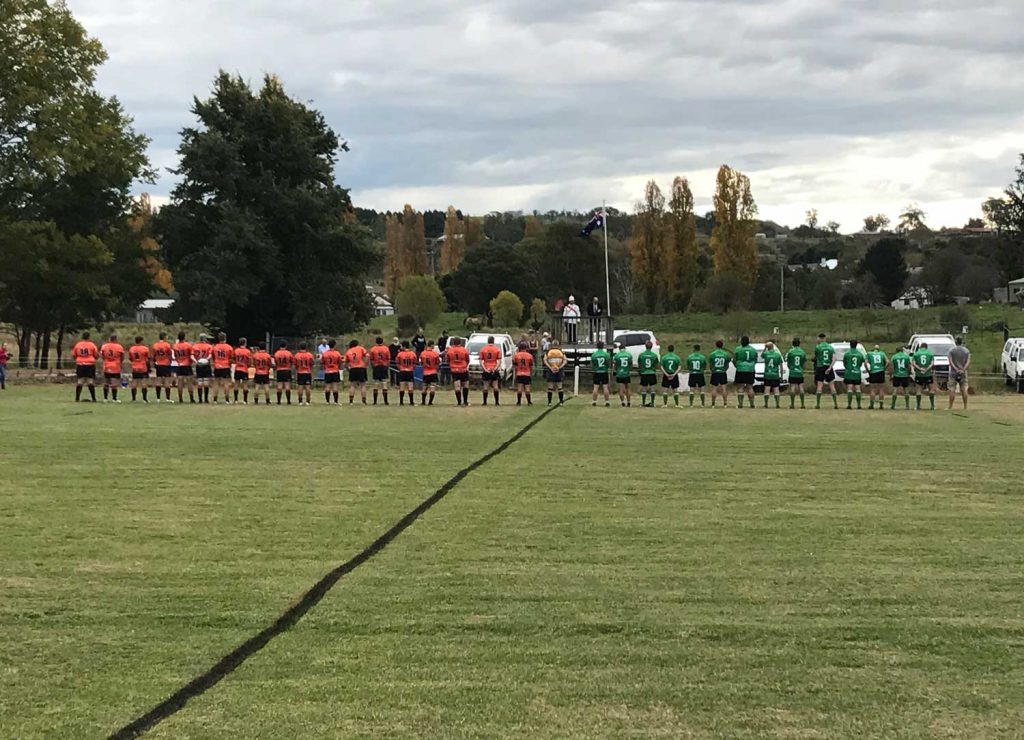 From the opening whistle the sides tested each other early with a flurry of exchanges. Taralga got the upper hand early through two converted tries to lead 14-0.

However the visitors got into their rhythm and created plenty opportunities out wide with the ball in hand. The Bushpigs first try came from a counter attack following a Taralga kick, when centre Ben Kuner (#13 – Mitre 10) busted through two defenders to make a break, linking with fly half Matt Want (#10 – Ray White Real Estate) and finally winger Jared Pipi Cummins (#14 – Snow FM) who raced around the final Taralga defender to score under the posts.

Taralga hit back before the break, making it 21-7 at half time. 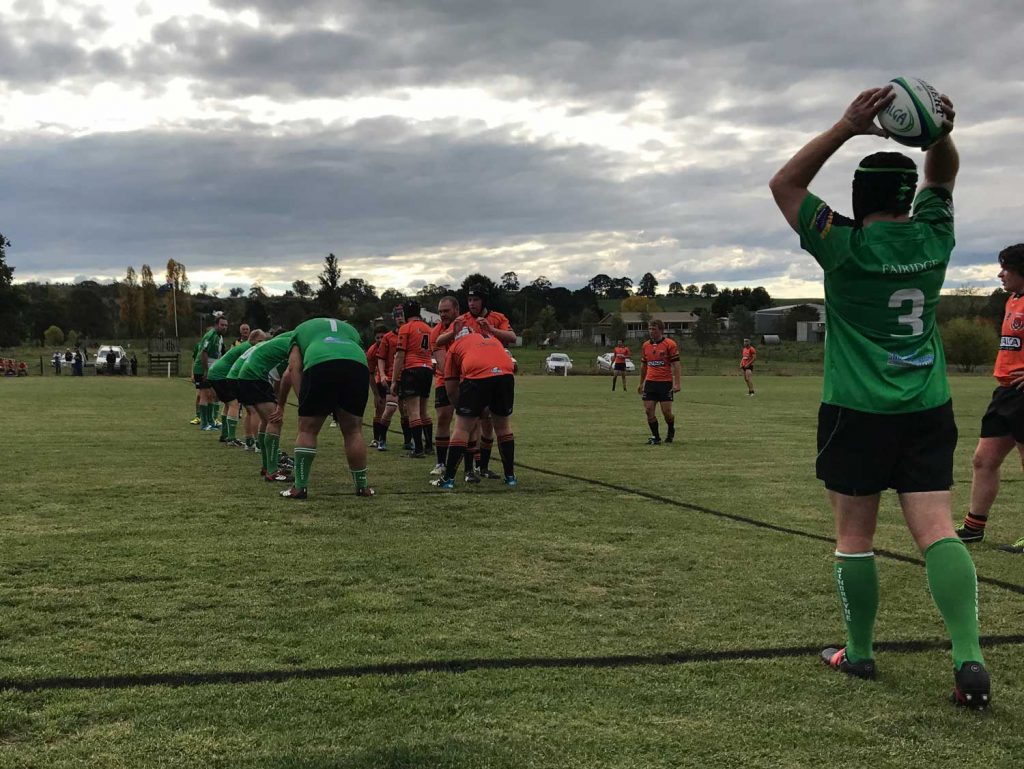 Brad Sanders prepares to throw in to the Busphigs lineout

The second half was a similar story; despite committed efforts from the Bushpigs in defence and attack, Taralga Tigers had the lion’s share of possession, resulting in more points for the home team.

The highlight of the second half for the Bushpigs was their second try. It started when wingerJared Pipi Cummins (#14 – Snow FM) made a half break before an unorthodox cross-field kick. Fullback Matt Caldwell (#15 – Rob Kneller Foundation) raced through to scoop the ball up, using his speed and footwork to step what seemed like half the Taralga team. His efforts appeared thwarted when he stumbled, only to forward roll (!), return to his feet and evade a couple more defenders to score beside the posts.

The Bushpigs received two yellow cards during the second half, meaning they spent 20 minutes with 14 men on the field. The main issue for the men in green was however a lack of possession caused by too many turnovers. Despite this the team showed continued improvement at times in attack, and especially in defensive organisation and commitment around the ruck. 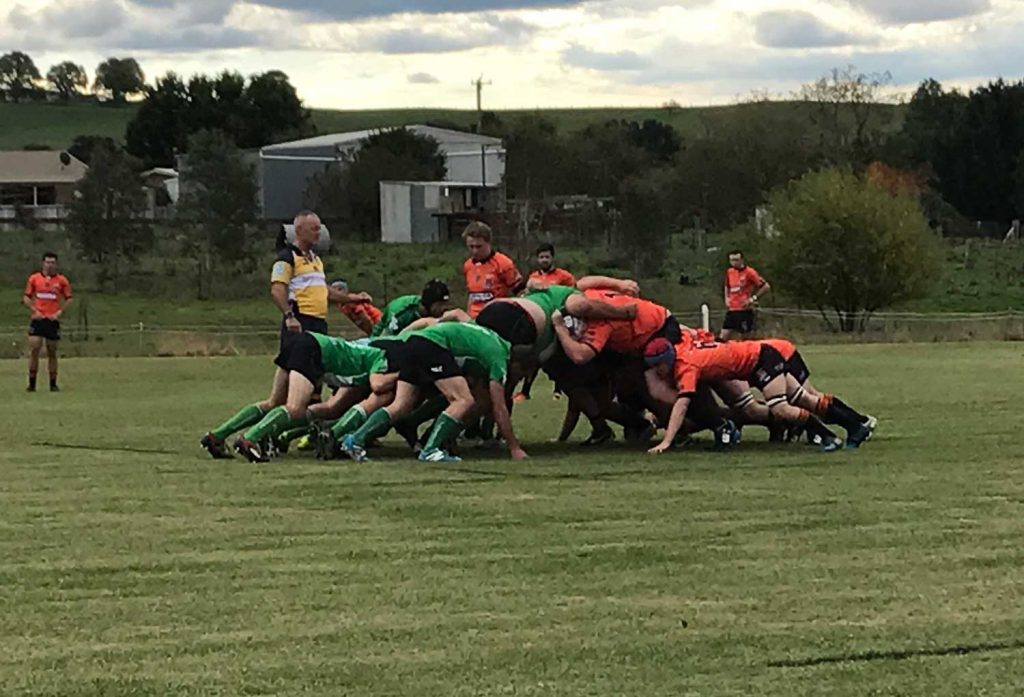 The team had a number of players playing out of position, and relied on cameos such as that of veteran Andrew Burke (Leesville Laundry) who helped the team start with 15.

Brad Sanders (#3 – Premier Slate), playing tight head prop instead of his usual number 8, was again solid across the park. Jordan Lewis (#2 – Alpine Glass & Screens) moved from the back row to the front row, having a strong game at hooker. Sam Pfitzner (#6 – Small Brothers Plumbing) and Ian “Everest” Vagg (#5 – Summit Protection) also shone. Tim Burgess (#7 – Alpine Law) moved from his usual wing position to the side of the scrum for the first time in openside flanker and was tireless in defence, playing arguably his best game in a Bushpigs jersey. Special mention to Rohan Kennedy (#9 – Marshall Batteries) who was tough as nails, playing with a busted eye and cheek bone following a recent cycling fall!

Next match: Round 6, vs Yass at Victoria Park, Yass Saturday 6 May

Next home match: Round 7 vs Batemans Bay at John Connors Oval Jindabyne ,Saturday 13 May 2:30pm

Thanks to all club sponsors and jumper number sponsors.